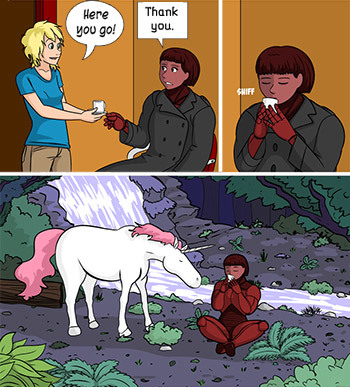 Sometimes the outside world can be a cold, cruel place, full of mean, hurtful people and scads of author-induced pain. That's why the best solution to a world bent on making you suffer can be to just curl up into a Troubled Fetal Position, suck your thumb, and go to a Happy Place inside your head. The Happy Place is rarely uninhabited though; it may be populated by scantily clad harem girls/boys, Spirit Advisors, an inner child or three, or if one is particularly unlucky they'll be roommates (headmates?) with a Split Personality, Superpowered Evil Side or Enemy Within. The troublesome roomies usually want to pick a fight.

A character interacting with others (or himself) in their Happy Place is a good way of giving them depth and explaining their motivation without having them act out of character in the show. The Stoic or The Quiet One who will never talk about the trauma that left them so may well relive it inside their mind, confronting a spectre of their guilt in the form of a dead loved one or other inner conflicts. In its extreme the dreamer may make a Journey to the Center of the Mind, sometimes accompanied by another.

Some characters are lucky and have their trip to the Happy Place happen outside of a show's real time, making their time and exposition there happen "instantly." A Cloud Cuckoo Lander is seldom so lucky. They may enter a fugue state or literally go catatonic while visiting their Happy Place, though this may sometimes be for the best if it's induced by emotional or physical trauma. Usually this depends on the nature of the Happy Place. Then again, the reason the Cloud Cuckoo Lander is so strange might be because they live there and visit real life.

There is one significant danger to the Happy Place, that being that if the resident has been sufficiently abused in the real world they might choose not to go back despite realizing it's fake.

For some reason, the Happy Place is often a beach of some sort.

See also All Just a Dream, Convenient Coma, Dream Sequence, Arcadian Interlude, Ghost in the Machine, Journey to the Center of the Mind, Angst Coma, and Spirit Advisor. Compare with Cuckoo Nest, The Final Temptation, Happy Flashback and Lotus-Eater Machine. This is often how Heaven is represented. Contrast Black Bug Room, which is just the opposite of a Happy Place. See also Bad Mood Retreat for a literal happy place.

This is in fact Truth in Television and is a short term way that many people with anxiety use to slowly function in the world.

open/close all folders
Advertising
Anime and Manga
Audio Book
Comic Books
Fan Works
Films — Animated
Films — Live-Action
Literature
Live-Action TV
It's revealed that the reason his subconscious created a Dom Com like that was because when he was a child, he would turn his attention to the TV when his parents would fight, and he wished he lived in a "perfect" home like the ones on TV.
Music
Puppet Shows
Radio
Theatre
Video Games
Webcomics
Web Original
Western Animation
Real Life
Feedback

Whilst she's getting a tooth removed, Dorien is encouraged to think of her happy place. It's exactly what you would think from a woman with an extremely active sex life.

Whilst she's getting a tooth removed, Dorien is encouraged to think of her happy place. It's exactly what you would think from a woman with an extremely active sex life.