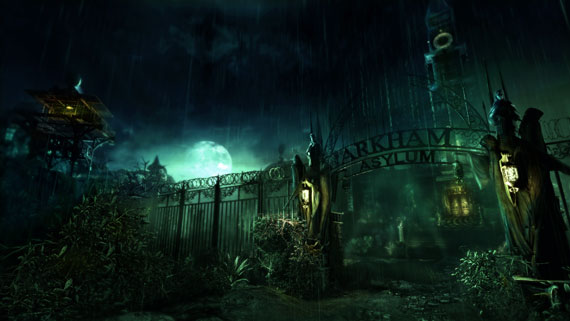 Makes you long for the good old days of exorcisms, doesn't it?
"You must admit, it's hard to imagine this place being conducive to anyone's mental health."
— Batman, in Arkham Asylum: A Serious House on Serious Earth, on the titular asylum

Poor Alice. She's lost her grip on sanity. She's stark raving mad. Surely what she needs to get well is a sleek modern psychiatric facility with freshly-washed sheets, nice nurses, and friendly doctors.

Yes, that's just what she needs. But what she'll get is Bedlam House, a dark, dank insane asylum straight out of the mid-18th to 19th century, staffed by Mad Doctors and Psycho Psychologists. Lobotomies in aisle four, sadistic Nurse Ratched figures please report for surgery, slow descent from minor quirks in Cloudcuckoolanders to sitting in the corner mumbling cryptic phrases about Things Man Was Not Meant to Know and Eldritch Abominations will begin after your four o'clock slop from the creepy orderlies.

Modern psychological techniques do not exist. Electroshock therapy is handed out like lollipops at the doctor's office — and we're not talking modern, painless electroshock, we're talking high voltage screaming shocks. Those padded walls haven't been scrubbed in weeks and even if they had been, the inmates would just keep writing on them. And sure, there may be straitjackets in the wardrobe, but patients are just as likely to be chained to the wall. Abandon all hope, ye who enter Bedlam House!

After the nickname of Bethlem Royal Hospital,

the first psychiatric hospital in the world. First turned into a "madhouse" in 1403, by the 18th century it had basically become another part of London's entertainment industry. For a penny (or free on the first Tuesday of the month), visitors could watch the inmates' antics, and bring long sticks to "poke and enrage" them. Seriously.

Bethlem Royal is still active, albeit having undergone multiple relocations, and is now, according to The Other Wiki, "at the forefront of humane psychiatric treatment."

Probably a case of Truth in Television, as some "mental patients"' real problem is chronic failure to conform to the relatively lax social norms of the outside world. The stricter rules of an asylum naturally tend to accentuate that particular character trait, leading to a predictable escalation. Compare Hellhole Prison for the kind applied to regular criminals. Also this can be a Justified Trope when the work in question is actually set in the 18th-19th century period where such madhouses were common.

Contessa's Rehabilitation Prison was a maximum security criminal rehabilitation center located in Prague. Its warden was The Contessa herself, who also served as its main criminal psychologist. The facility was heavily guarded and housed a large number of criminals whom the Contessa had collected over time, using hypnosis to rehabilitate them and reveal to her their stolen goods.

Contessa's Rehabilitation Prison was a maximum security criminal rehabilitation center located in Prague. Its warden was The Contessa herself, who also served as its main criminal psychologist. The facility was heavily guarded and housed a large number of criminals whom the Contessa had collected over time, using hypnosis to rehabilitate them and reveal to her their stolen goods.