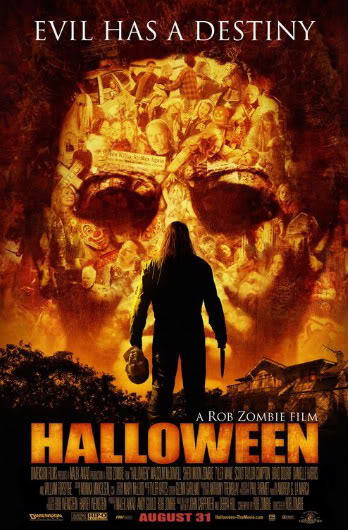 "These eyes will deceive you. They will destroy you. They will take from you your innocence, your pride, and eventually, your soul. These eyes do not see what you and I see. Behind these eyes, one finds only blackness, the absence of light. These are the eyes...of a psychopath."
— Dr. Samuel Loomis
Advertisement:

A 2007 reimagining of John Carpenter's Halloween (1978) and the Continuity Reboot of the Halloween series written and directed by Rob Zombie.

After the critically and financially dismal performance of 2002's Halloween: Resurrection, the execs thought it be a good time to kickstart the franchise again by taking on the 2000's Hollywood reboot craze, and thus Rob Zombie's Halloween (also dubbed Halloween '07) was made.

This time around we're shown more about Michael Myers's childhood in Haddonfield: his more than dysfunctional family, his deranged behavior, the murders he commits on Halloween, and his time at Smith's Grove Sanitarium under the care of Dr. Samuel Loomis (Malcolm McDowell). Then, fifteen years later, he escapes from the asylum and starts making way to Haddonfield, where one Laurie Strode (Scout Taylor-Compton) prepares for her babysitting gig on All Hallows' Eve. She, and her unfortunate friends, will soon find out just what kind of nightmare they have found themselves in.

While financially successful at the box office, its reception among critics and fans was very mixed, with some praising its originality, and some preferring to believe it never happened. Some consider the film more of a reboot than a remake because of the drastic change in direction of the story. Regardless, it was successful enough to spawn a sequel two years later.