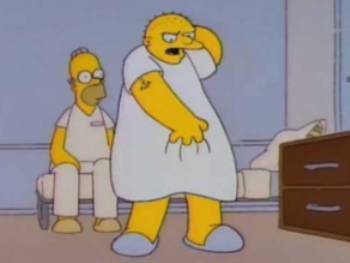 Stark Raving Dad is the first episode of The Simpsons third season.

When Homer is declared insane after coming into work wearing a pink T-shirt (that turned pink after Bart put his lucky red cap in the wash) and having Bart fill out his psychiatric evaluation for him, Homer is committed to the New Bedlam Home for the Emotionally Interesting and meets a big, bald mental patient who claims he's pop singer Michael Jackson. Meanwhile, Lisa is depressed over her upcoming eighth birthday.