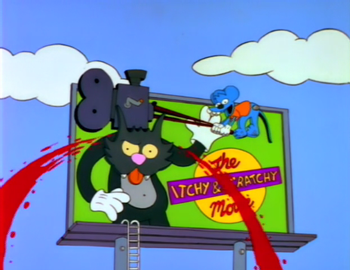 During Parent/Teacher conference night at Springfield Elementary, Mrs. Krabappel lets Homer and Marge in on the destructive and dangerous pranks Bart has been playing (synthesizing a laxative from peas and carrots, replacing the teacher's birth control pills with Tic-Tacs, bringing in a Krusty doll with a switchblade head, and sticking lit fireworks down a boy's pants) and recommends that Homer and Marge be stricter in their parentingnote because with enough discipline, even a hellion like Bart can be Chief Justice of the United States Supreme Court. If they fail, the best he can be in life is an overweight male stripper whose adoring female fans boo and throw things at him every night, but it proves too much with Bart manipulating Homer...until Homer decides to take the one thing away from Bart that he loves most: seeing the upcoming movie version of The Itchy and Scratchy Show.