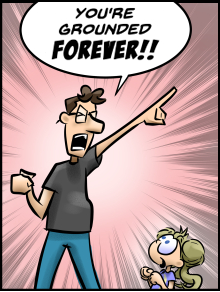 Roseanne: That is not funny! You're grounded until menopause!
Darlene: Yours or mine?
Roseanne: Your father's!
— Roseanne, "Toto, We're Not in Kansas Anymore"
Grounding is a standard parental discipline technique. But a frustrated parent may blurt out that their child will be detained for a ridiculous amount of time, often past the point they would reach the age of adulthood, for something very minor. Occasionally, the punishment may be for something quite serious, but the parent cannot think up a different punishment.
Advertisement:

Alternately, a teacher (usually a Sadist Teacher) will give a student severely extended detention, usually long enough to extend well after the kid has graduated.

A subtrope of You Are Grounded!, often falling under Disproportionate Retribution. Almost always undone via Snap Back. An inversion would be grounding the child for a ridiculously short amount of time for a very serious offense.

Not to be mistaken with the show Grounded for Life.

Compare Longer-Than-Life Sentence, where prisoners are sentenced to serve an amount of time that's way longer than anyone can be expected to live.

After being caught red-handed having sex with a much older boyfriend, Kimberly's father lays down the law, in a similar fashion to the Goof Troop episode, Axed by Addition.

After being caught red-handed having sex with a much older boyfriend, Kimberly's father lays down the law, in a similar fashion to the Goof Troop episode, Axed by Addition.