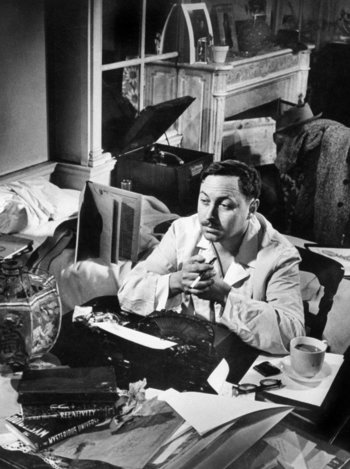 "If I got rid of my demons, I'd lose my angels."
"Would you mind running out and getting us a couple of tamales?"
— to Che Guevara, during a visit to Cuba.
Advertisement:

Thomas Lanier "Tennessee" Williams III (March 26, 1911 – February 25, 1983) was an American author from Mississippi,note He used "Tennessee Williams" as a Pen Name in tribute to his father, a Tennessee native. who worked principally as a playwright in the American theater. He also wrote short stories, novels, poetry, essays, screenplays and a volume of memoirs. His professional career lasted from the mid-1930s until his death in 1983, and saw the creation of many plays regarded as classics of the American stage. Williams adapted much of his best-known work for the cinema.

Fun fact: Diane Ladd is his cousin and Ethan Hawke is his great-nephew.

Tropes in the works of Tennessee Williams: