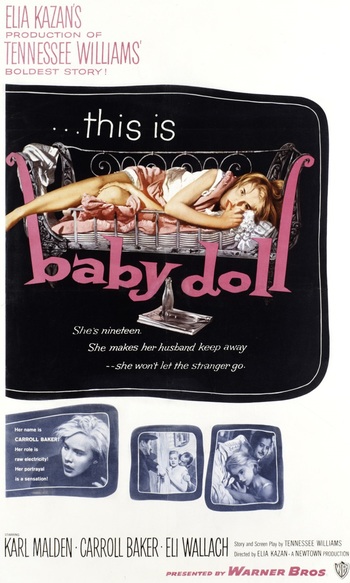 In the Mississippi Delta, nineteen-year-old Baby Doll (Baker) is married to failing cotton businessman Archie Lee Meighan (Malden), but she's saving herself for her twentieth birthday. She acts like a child and consciously sleeps in a crib while sucking her thumb.

Archie Lee is in debt and their furniture is being moved away because of it. Things get even worse for him when Sicilian Silva Vacarro (Wallach) moves into town with a booming business. Jealous, Archie Lee burns down Vacarro's gin. Vacarro is bent on revenge, so he seduces Baby Doll...

Banned in the United States for twenty years because it was too scandalous for the time (even though it earned Eli Wallach a Golden Globe Award and Carroll Baker an Academy Award nomination), the film is credited with originating the name and popularity of the babydoll nightgown.