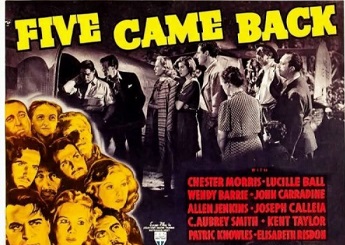 Five Came Back is a 1939 film directed by John Farrow. The plot involves a mixed party aboard a plane headed for Panama City, Panama. The group on the plane includes:

Their propeller plane flies into a storm, the flight is blown off course, and after engine failure, the pilots have to ditch somewhere in the upper reaches of the Amazon. After weeks in the wilderness Bill and Joe manage to get the plane ready to fly—but it won't be able to carry everyone back. And there's a tribe of headhunters out there.

Made on a pretty low budget, Five Came Back was a surprise hit, and is today regarded as one of the earliest disaster movies. The Ensemble Cast includes John Carradine (Crimp) and a young, shockingly gorgeous Lucille Ball (Peggy).

Remade in 1956 as Back from Eternity, with John Farrow directing once again. This version cast Anita Ekberg in the Lucille Ball prostitute role (here called Rena), with Robert Ryan as Bill the pilot and Rod Steiger as the anarchist (here called Vasquel). It is a highly faithful remake, with the main change being about 20 minutes extra time to further flesh out the characters.

Tropes found in Back from Eternity: