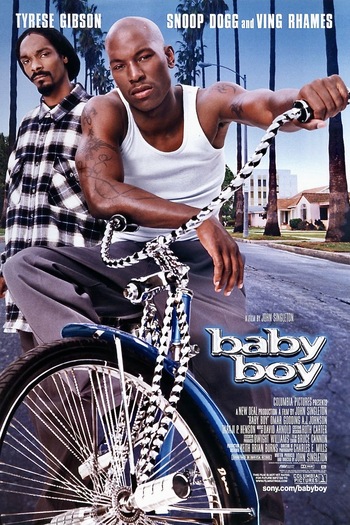 Baby Boy is a 2001 film written and directed by John Singleton as a sort of follow-up to his smash Boyz n the Hood, and while it wasn't as acclaimed, it still received generally positive reviews.

The film concerns Joseph "Jody" Summers (Tyrese Gibson), a young, selfish, and immature black man in South Central Los Angeles. Jody wants to live large but doesn't have a job. He's got two children by two different women, Yvette (Taraji P. Henson) and Peanut (Tamara LaSeon Bass), and has been living with his mother Juanita (Adrienne-Joi Johnson) for several years. As Jody deals with the increasing pressures of adult responsibility, he also contends with his troubled best friend Sweetpea (Omar Gooding) and new adversary Rodney (Snoop Dogg), Yvette's ex-boyfriend. And then there's his mother's new live-in boyfriend Melvin (Ving Rhames), a well meaning reformed gangster who Jody openly disrespects and ridicules. Melvin agrees with Juanita that her son should grow up, move out, and move on.

Tupac Shakur's "Hail Mary" plays in one scene and he was set to star in the movie before his murder.