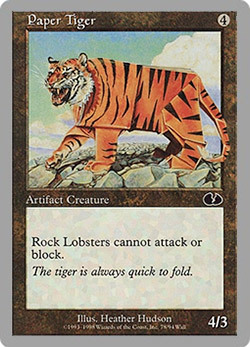 But it still loses to the Scissor Lizard.
"In appearance, it is very powerful, but in reality it is nothing to be afraid of. It is a paper tiger. Outwardly a tiger, it is made of paper, unable to withstand the wind and the rain."
— Mao Zedong
Advertisement:

Subtrope of More than Meets the Eye. A character is not as tough as their physical appearance and/or personality suggests. Basically the opposite of Hidden Badass, though they can and oftentimes do go the route of the Cowardly Lion or the Cornered Rattlesnake.

"Paper tiger" is a literal English translation of a Chinese phrase, meaning something that seems as threatening as a tiger, but in reality is harmless. This Chinese colloquialism is similar to the English phrase "its bark is worse than its bite". Which is not always a good thing.

The phrase is an ancient one in Chinese culture, but sources differ as to when it entered the English vocabulary. It is found translated to English as early as 1836, in a work by John Francis Davis.

This usually falls under the following subtropes:

Compare with Feet of Clay, which is when they purposely claim to be more badass than they are. Contrast this to Badass on Paper, where the character isn't very impressive in person but actually performed all the impressive feats that are the basis for his or her reputation, Mugging the Monster for the complete opposite (finding that a weak-looking individual is much more dangerous than they seem) and The Worf Effect, as it seems that this applies to the Worf him/herself in context, whereas The Worf Effect refers to the over-arching phenomenon of "stock 'tough' character handed ass by tougher one."