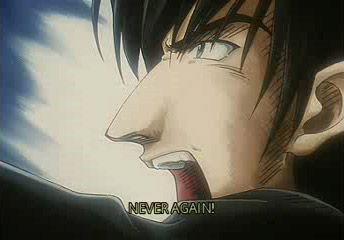 Rather than animating a critical moment in a battle, and perhaps giving away a plot point too soon, some animators cut to or dissolve into a still image designed to look like an action shot, often blurry with motion, that shows the important hit, or dodge, or other action, without revealing anything crucial. The most attractive of these are made to look like they were done in pastel chalks, although simple black line-drawings are also used. The Ken Burns Effect is frequently employed. These are also frequently used to emphasize especially dramatic moments, especially during cliffhangers.

This technique was invented by the late, great, and highly influential anime director Osamu Dezaki.

The term of art for this type of frame is "Harmony Cel." Other common terms include "Postcard Memory" or just "a Dezaki". The color is usually painted with gouache like a background would be. (Although any media could potentially be used, chalk pastels or charcoal are messy and tend to cling to paper very loosely, increasing the likelihood of smearing during handling or photography. No matter what it looks like, they were almost certainly not used.) The lines might be done as they would on a normal cel, or they might be painted in as well.