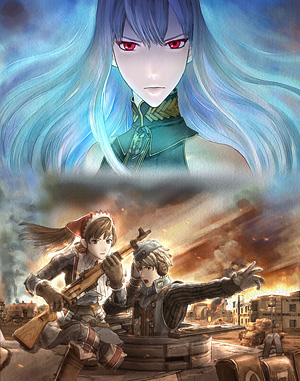 Valkyria Chronicles, known in Japan as Valkyria of the Battlefield: Gallian Chronicles is a video game made by Sega for the PlayStation 3 and released in 2008. A PC version including all previously released Downloadable Content was released on Steam

on November 11, 2014 (where it proceeded to smash all sales expectations

The story is set in a fictional Europa, in 1935, when two large blocs, the Atlantic Federation and the East Europan Imperial Alliance, are at war over control of the continent in what is called the Second Europan War.

Caught in the middle of the warring alliances is the Principality of Gallia, a small neutral nation famed for its rich Ragnite mines. Gallia is also known for its policy of Universal Conscription: in lieu of a standing army, every citizen is required to undergo basic military training with the provision that they can be drafted into the army at any time to defend Gallia against an external threat.

When the Imperial Alliance launches a surprise attack against Gallia, the policy of Universal Conscription is activated and every able-bodied man and woman is drafted into military service. Three of these new recruits are Welkin Gunther, an animal sociologist and son of a famous general; Isara, Welkin's Darcsen foster sister; and Alicia Melchiott, a young woman who dreams of becoming a baker.

Along with a wide and eclectic cast of other civilians, they are organized into Militia Squad 7 and put on the front lines to defend their home against the Imperial offensive. Together they must face not only the advance of the Imperial army — including the dreaded "War Witch" known as Selvaria Bles — but their own internal disputes as those in the Gallian military seek to manipulate or use Squad 7 for their own ends.

Like many JRPGs, Valkyria Chronicles is very story heavy and contains many themes. The most evident are the tragedies of war, racism (of the hair color variety), fighting to defend one's homeland, friendship, family bonds, and love. Every character you can control (and a good deal of NPCs, too) has their own personal biography, special traits, likes and dislikes, and personality quirks, making it feel like you are actually controlling real people in an actual war. However, unlike many JRPGs, Valkyria Chronicles chooses to avoid a high fantasy setting and instead opts for a very World War II themed world with light fantasy elements.

Gameplay-wise, Valkyria Chronicles is unique, as it is a mix of Turn-Based Tactics, Real-Time Strategy, Eastern RPG, and Third-Person Shooter. During battle, players use a pool of Command Points to directly take control of individual units so they can move and attack. While the player is controlling a unit, enemy units will automatically fire on them if they pass through their line of sight, making cover and strategy in approaching your target much more important. All characters the player controls are separated into five classes: Scouts, Shocktroopers, Lancers, Engineers, and Snipers each with their own strengths and weaknesses. In between battles, players can use experience and money earned from battles to level up specific classes and purchase new weapons and upgrades for their troops. There are also tanks, which do not level up but can be upgraded.

Valkyria Chronicles has received generally positive reviews from critics. The main selling points are its beautiful graphic design, engaging story, and unique gameplay based on a unique blend of elements from various video game genres.

In addition to the game, there is also an anime adaptation produced by A-1 Pictures, simply called Valkyria Chronicles which first aired on April 4, 2009. There are also manga adaptations in print as well. Extra downloadable content was released in Japan after release, and is now available for download in North America as well and Europe. Available are a mission where you play as Edy, 4 missions playing as Selvaria & controlling Imperial forces, an extra hard skirmish setting and "Challenge of the Edy Detachment", a set of seven skirmishes tailored to the various classes, as well as the tank unit and a final, specially-designed skirmish bringing them all together.

There is a sequel for the Playstation Portable, called Valkyria Chronicles 2: Gallian Royal Military Academy. It is set two years after the first game and involves civil turmoil as students are drafted in to fight the threats within the country.

A third game, Valkyria Chronicles 3: Unrecorded Chronicles, has been released in Japan. It is a Gaiden Game on the PSP, taking place at the same time as the first game. This game has also gotten an anime adaptation.

Following Revolution, Valkyria Chronicles 4: Eastern Front was released for Playstation 4, Xbox One, PC, and the Nintendo Switch in 2018. It returns to the setting of the Second Europan War, but this time focusing on a Federation operation to end the war in one swell swoop.

This series is not to be confused with Valkyrie Profile.