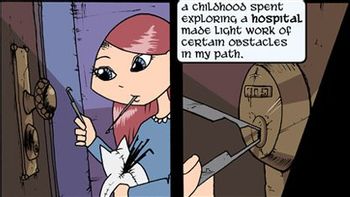 There's a kid, usually a preteen, who thinks something suspicious is going on. Those men talking in low voices, that guy who keeps sneaking away... what are they up to? Enter the Snooping Little Kid.

The Snooping Little Kid will hide where the bad guys are and try to listen in on their conversations, usually picking up just enough information to prove that something sinister is going on, even if the kid doesn't know exactly what. That often is what kickstarts the plot, or at least advances it into high gear.

Sometimes the Snooping Little Kid is spotted, or manages to make a noise that draws the attention of the bad guys. In that case, the kid will either make a narrow escape, or end up being captured and Bound and Gagged.

Common trope in adventure or mystery stories, or stories with such themes, especially when aimed at children. Happens in books as well as cartoons, TV shows, and movies.

Do Not Try This at Home — tell a responsible adult or call the cops if you see something suspicious!