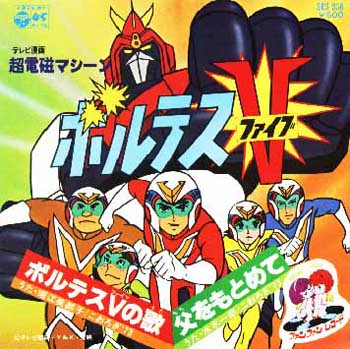 The Voltes team. From left to right: Daijiro, Hiyoshi, Kenichi, Megumi and Ippei.
"V TOGETHER!! LETS... VOLT... IN!!!"
Advertisement:

Voltes V (formally, 超電磁マシーン ボルテスV or Choudenji (Super Electromagnetic) Machine Voltes Five) is the second of Tadao Nagahama's Robot Romance Trilogy of Super Robot series, premiering in 1977. It was preceded by Combattler V and followed by Daimos. As with its predecessor Combattler V, the "V" is for the Combining Mecha's five constituents, their five pilots, and the traditional V for Victory.

Considerably Darker and Edgier than Combattler V, Voltes V chronicles the Voltes Team and Camp Big Falcon's defense of Earth from the invading Boazanian Empire, Beast Fighter by Beast Fighter, as well as a simmering civil war within planet Boazan itself, long under the brutal caste-system rule of Emperor Zu Zambajil, between the horned elite and the hornless commoners.

Because of its popularity in the Philippines, a live-action series adaptation entitled Voltes V Legacy is currently in production which will be produced by GMA Network and Riot Inc. Post Production under the supervision of Toei.

Has a character sheet that needs to be completed.