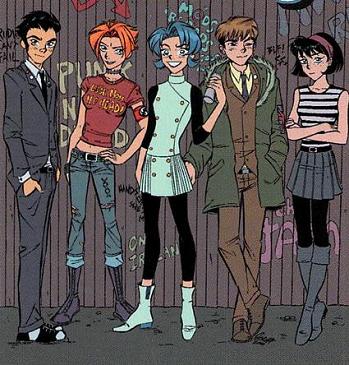 The usual gang of misfits.
From left to right:
Victor, Clover, Bleu, Alan, Erin.note Not pictured: Monkeyboy and Risa.
Advertisement:

Blue Monday is a comic series (comprised of small strips, short stories, and longer multi-issue arcs) written and drawn by Chynna Clugston, an indie rock and pop-culture fanatic. The series revolves around Bleu L. Finnegan, a teenager living in early 90's California, her friends, and their misadventures.

Published by Oni Press and later Image Comics, most of the stories are slice-of-life fare (school, parties, concerts, pranks, going for pizza, dates), with the occasional supernatural oddness thrown in (floating Jesus heads, a not-so-imaginary Scottish Pooka in the form of a giant otter...) amid the various fart and sex jokes. Aside from its unique blend of Japanese and American humor and subject matter, Blue Monday is also notable for having the main title and the title of each chapter being the title of a song. And while it's drawn in the style of a Japanese manga, the content is purely American.

The first installments came out in the late 90's as mini-strips in Oni Comics Presents, but new arcs pop up now and again, the latest being 2008's "Thieves Like Us". The author has stated that she'll keep making new installments as they pop into her head. It is being reprinted by Image in 2016.

This comic provides Examples Of: