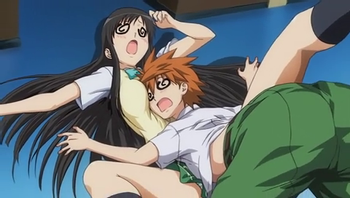 A normal day for Rito.
"How did we get into this position from the way we bumped into each other? It seems the laws of physics don't apply to you anymore."
— Golden Darkness, To Love Ru
Advertisement:

When two characters fall in close proximity and wind up in a sexually suggestive position. The guy finds himself in Marshmallow Hell, or the girl lands sitting on his face. It could even result in an Accidental Kiss. The lighter versions will just end with the guy copping a feel.

Needless to say, this trope is particularly likely to affect the Accidental Pervert.

Regardless of the circumstances, nine and a half times out of ten the girl will act like it was deliberate — usually, that means screaming "Pervert!" and slapping him. On the other hand, she might tease him for it, welcome the advance or remark on his "boldness". It mostly depends on what kind of girl she is.

If someone walks in on them, Not What It Looks Like is all but inevitable. Often leads to a Please Get Off Me.

A staple of Harem Anime. May overlap with Crash-Into Hello if this is the first time the characters meet. Thanks for the Mammary and Funbag Airbag are Sub Tropes. Not to be confused with unintentional occurrences of awkward positions, as caused by Ragdoll Physics in video games. Compare Grossout Fakeout.

The more serious and romantic Sister Trope is Literally Falling in Love.

open/close all folders
Anime & Manga
Comic Books
Bleu: If you didn't know each other before, I'd say you know each other now. Is that legal in public?
Victor: Sorry! I'm sorry!
Clover: I hope for your sake that's a pencil! A simple "hello" would have done fine, y'know!
Fan Works
Advertisement:
Films — Animated
Films — Live-Action
Literature
Live-Action TV
Professional Wrestling
Video Games
Webcomics
Western Animation
Feedback

Cloud and Tifa Jump From Train

Cloud and Tifa end up in a intimate embrace after jumping off a train.

Cloud and Tifa Jump From Train

Cloud and Tifa end up in a intimate embrace after jumping off a train.