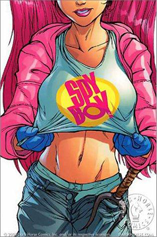 You'll be seeing a lot of this.
SpyBoy is a comic book series created in 1999 by writer Peter David and artists Pop Mhan and Norman Lee, and published by Dark Horse Comics.
Advertisement:

The series centers around Alex Fleming, an ordinary teenage boy who is secretly part of a project to create the world's most deadly and effective secret agent. Unfortunately, while the world's various spy agencies are after him for reasons of their own, Alex himself is unaware of his super-ruthless sleeper persona. The adventures start when Alex's SpyBoy identity is activated, throwing SpyBoy into various death-defying situations around the world while Alex struggles to maintain relevance against his super-capable alter ego.

The basic idea for SpyBoy came from Dark Horse, who hired Peter David to develop the concept, including the cast and their back-stories. David has lamented that the ideas he had for the series' run were not completed, as Dark Horse chose not to continue with it.