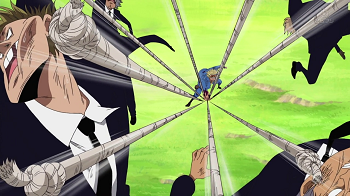 They did knot see that coming.
Whips and chains offer plenty of advantages in combat. Being able to hit your opponents from a distance with just a cool flick of the wrist is way too unrealistic to pass up.
Advertisement:

Then there are characters who use ordinary rope or string — the most basic, unweaponized version of the above — in battle as a tool.

Sure, it might not be lethal, but you can use it to pull anything or anyone anywhere, restrict your opponent's movement or just get a hold on them, use tension or torsion to launch something, lay a trap for an unsuspecting foe... or just about anything else that can control the flow of a fight. Fiction allows for shenanigans like Variable-Length Chain and Instant Knots, so these characters can duplicate a Grappling-Hook Pistol to pull themselves around in settings that don't technologically allow for one.

Of course, rope can be applied in ways like Razor Floss and Choke Holds where it can be lethal.

Sometimes overlaps with Master of Threads. Characters like this tend to be along the lines of The Smart Guy, The Sneaky Guy, The Chessmaster, and the Combat Pragmatist thanks to the levels of complexity and deception that their rope tricks demand. This can also have several implications.

Blade on a Rope is a sub-trope of this if the rope has, well blades at the end of it.