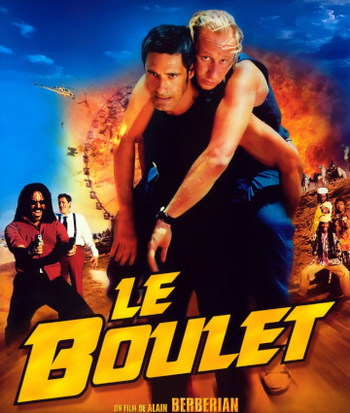 A literal example.
"How about we do us all a favour and give him the slip? Mole is slow, stupid and tasteless."
— Adder, The Animals of Farthing Wood
Advertisement:

Probably one of the most hated characters in a movie or series fandom, The Load is a liability to the heroes. They are not always the proximate cause of the heroes' failures, but they're weak, they're often Too Dumb to Live, and for some reason they've just got to hang around with the cool heroes and be a part of the action all the time. It doesn't occur to The Load that, being an unathletic Muggle, it really might not be such a good idea for them to rush headlong onto the battlefield along with the heavily armored and super-powered heroes. Said heroes will usually have to spend at least half the battle keeping The Load alive. It's not hard to see why the fans hate them so much.

The Load must be played carefully, lest they become The Scrappy. If they must be protected, or come along despite lacking any useful skill, there should be a good reason for it, and not just as interaction, or perhaps they were not invited to the battle but brought themselves along. If a character who was once clearly the Load starts upstaging the characters who are competent or powerful, they are even more likely to be hated.

The Load is the TV/movie equivalent of a powerless NPC in a video game Escort Mission — only, unlike a video game, you don't have the power to press the "B" button and throw The Load to the zombies if you start getting irritated by them.

What makes this trope especially grating is that The Load often actually does have powers or an ability that will come in handy for the heroes, which is, of course, why they must keep dragging The Load around with them. The one instance where The Load uses this power to save the heroes, however, does little to make up for the 99 percent of the time that they have spent being a screeching boat anchor.

Closely related to the Damsel Scrappy, Non-Action Guy, The Team Normal (if this character is the load because of a lack of powers), and the Satellite Love Interest. Can lead to a Live-Action Escort Mission, Badly Battered Babysitter, or similar. Might result from a Story-Breaker Team-Up where one of the members is out of their league. The character may be a Living MacGuffin.

If a Time Skip occurs in the series, expect The Load to have Taken a Level in Badass. Compare The Millstone, who is much more proactive in making failure the only option, and Helpless Good Side, for when a character with a Split Personality is the load half the time. Contrast The Drag-Along, who wants to avoid danger, but is forced to join a party of heroes against his will.