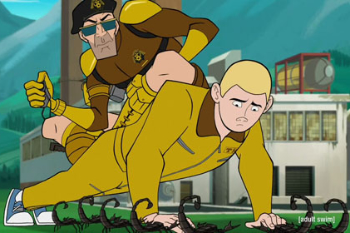 "Is little candy baby afraid of a little scorpion venom? I said give me twenty, maggot!"
"It can be inferred that we've been too soft on Kenichi. Therefore, I've designed a training program especially for him. It's called... 'Making His Whole Life About Fighting Even If He Dies!'"
— Koetsuji, Kenichi: The Mightiest Disciple
Advertisement:

Characters in fighting, sports, and other My Kung Fu Is Stronger Than Yours series have a tendency to go to extremes when doing their training. Whether it's a regimen concocted by a harsh (or just sadistic) mentor, or self-inflicted, expect to see our heroes go through training that would incapacitate or even kill an ordinary human. When played straight it's always worth it.

Hey, no pain, no gain. Ergo, according to this trope, a lot of pain, a lot of gain.

Frequently occurs in a Deadly Training Area sometimes combined with a Batman Cold Open (or Danger Room Cold Open in the case of groups). For Training From Hell for a whole army, see The Spartan Way. Frequently overlaps with Imposed Handicap Training. For the parental or paternal figure version see Tough Love. When used specifically as punishment for whatever reason or offense, see Physical Fitness Punishment. May result in Sacrificed Basic Skill for Awesome Training if done from childhood. See also Improvised Training, when they have no equipment or money with which to train. See Look What I Can Do Now! for the aftermath.