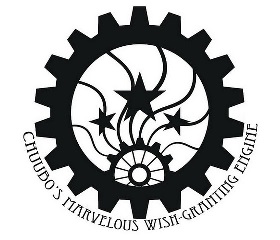 Chuubo's Marvelous Wish-Granting Engine is a tabletop game by Jenna Moran geared mainly towards playing pastoral slice-of-life fantasy, ala Studio Ghibli movies, Adventure Time, or My Little Pony: Friendship Is Magic, although gameplay is flexible enough to cover a wide variety of genres and story styles, even to works as complex as Homestuck or as symbolism-ridden as Revolutionary Girl Utena. While it has its origins in another of Jenna's games, Nobilis, and some of its tone comes from her Hitherby Dragons project, for the most part, Chuubo's is its own thing.

The setting is a town called Town, which is surrounded by a multicolored void, situated somewhere that's no true place. It's a nice place to live by all accounts: quiet, peaceful, and sleepy, a place where you can just get on with life. However, there are still strange and interesting things to get involved with if you look around.

Chuubo's is intended as a transmedia project, initially focusing on novels and RPGs. The following are currently available from Drivethrurpg:

, where she provides additional material and stuff from her work-in-progress.