In a Single Bound 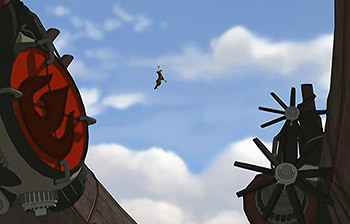 He sticks the landing, too.
Aku: You can fly?!
Jack: No. Jump good.
— Samurai Jack
Advertisement:

The act of jumping with impossible feats. A subtrope of Not Quite Flight.

It's also apparently a power you can get through martial arts - see Crouching Tiger, Hidden Dragon for theatrical tree-hopping (not to mention balancing on the tips of branches that couldn't support a squirrel). This trope is based on an actual technique for jumping higher employed in some martial arts, although not to the extent usually shown in media. (Basically, you attach weights to your legs, get used to jumping to your current normal height with the weights, then take the weights off.)

This tends to appear less in modern times; superpowered characters who want to, say, surmount Tall Buildings are more likely to be capable of true flight. However, in the earlier ages of Comic Books and even some new characters often feature high jumping as opposed to flight. Superman himself was a jumper before flying became an iconic feature of his. If you're an anime character, however, you'll be able to do this effortlessly without any training, most of the time.

See also: Bouncing Battler, Roof Hopping, Goomba Stomp, Jump Physics, and Spring Coil. Also related to, and may be used to attain the high ground. Contrast with Le Parkour, which relies on a combination of climbing and running to achieve the same results, and Stepping Stones in the Sky.

Asura is able to launch himself with the inertia of his own attacks.

Asura is able to launch himself with the inertia of his own attacks.