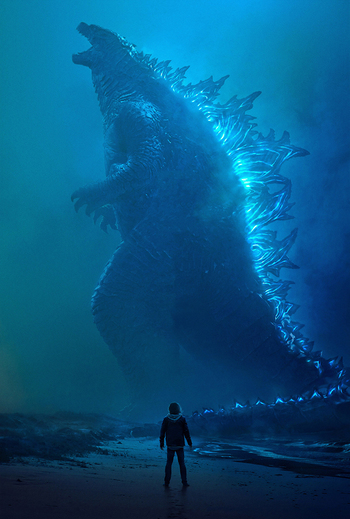 "The top of the primordial ecosystem. A god, for all intents and purposes."
"Gojira may be the answer. I believe he's here to restore balance. He can defeat them."
— Dr. Ishiro Serizawa

The last known living member of a species of gigantic amphibious beasts that roamed the Earth back when the planet was being bombarded by radiation during the Permian period. The military found out about the creature in 1954, and tried to cover up his existence with several nuclear strikes that were reported as tests - but these failed to have any effect on the monster. He eventually re-emerged in 2014, having a score to settle with the MUTOs.

In 2019, the humans find him at the bottom of the ocean wanting to be left alone... until he is called to battle against his greatest nemesis, Ghidorah.

In regards to the merchandise for the series as a whole, this version of the Big G is known as "Legendary Godzilla" to differentiate him from other versions of the character (named after the company producing the MonsterVerse films, Legendary Pictures).

For the Toho versions of Godzilla, go here.