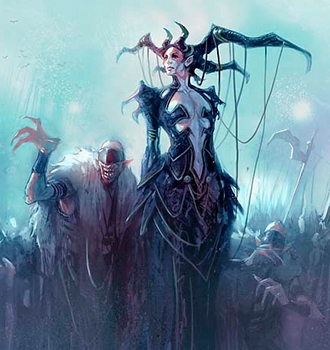 Even sexy vampires realize the value of keeping uglier friends nearby.
"They say the Zombie Master controlled these foul creatures even before his own death, but now that he is one of them, nothing can make them betray him."
— Magic: The Gathering card "Zombie Master" flavor text
Advertisement:

Some monster or non-human species have aristocracies with Blue Bloods that just so happen to actually have blue blood. And rarely, lowborn monsters (frequently former humans) can aspire to earn such titles with "heroic" deeds, political savvy, or by dint of Asskicking Leads to Leadership. Beyond that though, some Monster Lords are physiologically different from rank and file Mooks. Maybe the species as a whole has a Fantastic Caste System, and over time the leaders have become a different "race" that is more powerful by nature. Other monster races may have a life cycle where old or "mature" mooks become lords if they grow really powerful, use a magic ritual, or they have a really strong willpower. Likely to be the Big Bad, or at least a major villain, though this may not necessarily be the case.

Frequently, the Monster Lord will be The Man Behind the Monsters. Even though not human, they will look human-like because the process of climbing the Evolutionary Levels ladder raised them higher up on the Bishounen Line. Likewise, while their lesser kin may only be about as smart as an animal, the Monster Lord will typically have human-level or higher intelligence and be capable of speaking and understanding human speech (though not human morals). Of course, in some works the Monster Lord looks more monstrous than their brethren. And even in settings where the Bishounen Line is in effect, if there's a rung above Monster Lord, it'll probably be a One-Winged Angel and make them monstrous again. Both types are likely to repel what lesser monsters are weak to.

Their children/infectees will likely be stronger than other mooks, have an easier time becoming a Monster Lord, or naturally be born one. They will usually become a Hive Queen or have great Psychic Powers over the lesser monsters, especially ones they create. And of course, they will be physically stronger, tougher, and faster. Sometimes, they'll even prey upon their lesser kin. Monster Lords also tend to be the oldest members of their species, thus the strongest.

One downside though is that Monster Lords tend to be epic spell components or chow in the Food Chain of Evil. So wizards, other monsters, or even their own underlings will try to eat them to gain more power.

In video games, their "sprite" will likely be wholly unique, not a Palette Swap. The net effect is that the Monster Lord is a King Mook with a few extra bells and whistles.

Supertrope of Insect Queen, Vampire Monarch, and Demon Lords and Archdevils. See The Beastmaster, a more watered-down version of this. See also the Monster Progenitor, who is usually the top Monster Lord of its kind. Compare and contrast with Maou the Demon King.

Jack Skellington is the Pumpkin King of Halloween Town and the monsters that live there.

Jack Skellington is the Pumpkin King of Halloween Town and the monsters that live there.