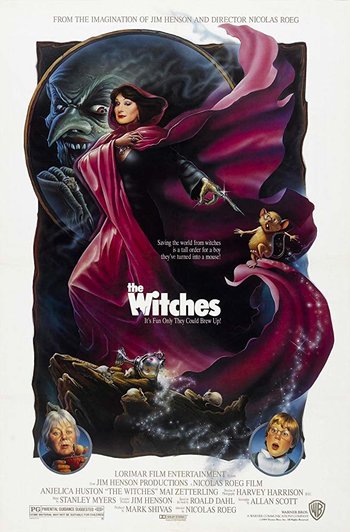 A 1990 film based on the 1983 Roald Dahl book The Witches, starring Anjelica Huston, directed by Nicolas Roeg and produced by Jim Henson, the last film he produced; it was also the last screen version of a Dahl work made while the author was alive (the film was released shortly after Henson's death and shortly before Dahl's) and the final theatrical feature made by Lorimar (although the company continued in television for a few more years before being absorbed into Warner Bros.).

The endings of the book and the film are drastically different due to Bowdlerisation. To say Dahl was a wee bit disappointed by this would be a massive understatement.