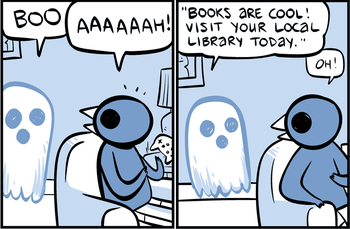 "All I need is the chance to show you,
My heart unmasked and the face of my soul.
Or to slide on a beautiful rainbow, singing songs that we don't know.
We could sing the words with glee if you would just play...
Just play with me, I am misunderstood.
Please don't judge a book by its cover.
Take the time to get to know me and you'll see that I'm a friend.
I am misunderstood..."
— "Misunderstood", Franklin and the Adventures of the Noble Knights
Advertisement:

Sometimes, what people call villains are just... misunderstood. They aren't necessarily evil or deliberately committing bad deeds, but rather, everybody around them assumes that they are the "bad guy" simply because their ideas and goals might not mesh or because they mistakenly believe them to be aiming for bad things. They might be misunderstood because of their appearance (for example, the Beast in "Beauty and the Beast"), as a result of family, by the nature of their powers, or due to circumstances outside of their control.

Can also refer to characters who aren't deliberately portrayed as antagonists, but are still misunderstood in a negative light.

Dark Is Not Evil is a close relative of this trope; a character who is dark but not evil is likely to be mistaken for a villain due to their scary exterior.

Obliviously Evil is a subtrope (despite the name) when a character doesn't have the malevolent intent to really be considered an evil person but causes serious harm anyway because they don't understand that what they're doing is wrong.

See also Justified Criminal, Anti-Villain, Tragic Villain, Misunderstood Loner with a Heart of Gold, Woobie, Destroyer of Worlds and, for nonsapient creatures, Non-Malicious Monster. Compare and contrast Hero with Bad Publicity and Good All Along. When a character decides to give in to the accusations, Then Let Me Be Evil results. Contrast Knight Templar, who believe they are righteous under cruel action, in reality anything but (in other words Not Good, Just delusional), who may commit Van Helsing Hate Crimes against species they consider "evil". Also contrast Affably Evil, when a character is actively and genuinely Evil, though their niceness is not a facade. When the fandom makes dubious or obviously wrong claims that a villain is this, it's Draco in Leather Pants.

The Trickster isn't a criminal mastermind. He's just a mentally ill individual with a gimmick. The Flash acknowledges this and it makes him all the more likable for it.

The Trickster isn't a criminal mastermind. He's just a mentally ill individual with a gimmick. The Flash acknowledges this and it makes him all the more likable for it.