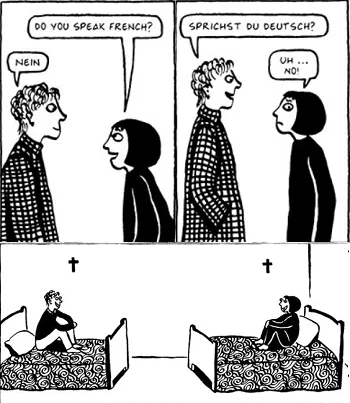 Imagine you happen to be somewhere where you don't understand the locals, and the locals don't understand you. Nobody can pull off You No Take Candle. There are no interpreters. You may try speaking VERY LOUDLY and ve-ry slooowww-ly your own language, hoping that somebody would eventually understand you. Then you try international words or some basic phrases of the other language, but sadly nothing beyond Poirot Speak. Then El Spanish "-o", which is trying to make your native tongue sound like el language-o of the other person-o, is a frequent thing to do, but not very helpful either.

Generally, people will try very hard to convey at least some meaning. What the characters say in this situation may sound like Gratuitous Foreign Language but if the language is more complicated, it can be Bilingual Bonus for some viewers.

Non-verbal communication, Hand Signals and Body Language will be employed as well. The characters will try to show their meaning with their faces or hands, pointing to objects around them or drawing simple things.

If the characters are foreigners in an English-speaking country, they will talk to each other in fluent English, but the locals won't be able to hear them.

This situation can be very stressful and its consequences may vary in fiction as well as in Real Life. It's frustrating for anybody, but especially to those eloquent in their native tongue. The situation may be entirely friendly if slightly awkward, neutral or truly hostile with tragic ends. The characters may try desperately to communicate, and eventually, they may succeed. Or they might get an interpreter, or perhaps they will actually learn the language or they will develop a new one. However, sometimes the situation stays unresolved.