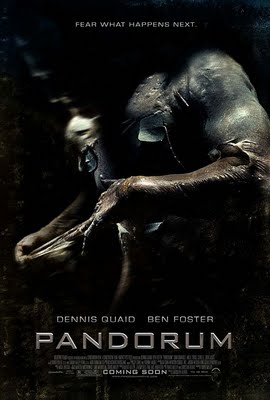 Gallo: Do you know the symptoms of Pandorum?
Payton: I've seen it before.
Gallo: Ever witnessed the symptoms firsthand? It's not something you can easily detect. It starts with a shiver, an itch, a slow boil, the biological side effects of flying deep space feeding into paranoia and a paranoid brain feeding the side effects - a downward spiral. There is no shutting off the heat. No matter what you do, it'll boil over.
Advertisement:

Pandorum is a sci-fi/mystery/adventure/horror film released in September of 2009 and starring Dennis Quaid and Ben Foster. A Spiritual Successor of Resident Evil (2002) that echoes The Time Machine, The Star Lost, When Worlds Collide, and Alien.

Bower (Foster), a flight engineer on board a colony sleeper ship designed to settle the distant Earth-like planet of Tanis, wakes up unexpectedly from hypersleep with gaping holes in his memory and finds the ship almost without power and apparently deserted. He finally manages to wake up a fellow member of the flight crew, Payton (Quaid), and the two of them set about getting out of the control room they're locked into and finding out what happened to the crew.

With Bower descending into the bowels of the ship and Payton guiding him via a radio and a crank-powered control panel, it soon becomes evident that the men are not alone on board the Elysium - a few other passengers have resorted to survival of fittest mode due to being hunted by roving bands of mysterious tribal flesh-eating troglofaunal hominids.

Or is it all in Payton and Bower's heads, hallucinations brought on by the onset of Pandorum, a particularly nasty brand of cabin fever that resulted in the murder of the crew and passengers of a similar ship years before?

Although it was a flop at the box office, the movie, like Event Horizon, has developed into a Cult Classic over the years.