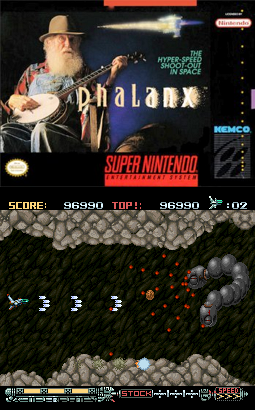 The rootin'-tootin' banjo-pickin' high-flyin' cosmic adventure! Except not.
Monster in the Darkness: Wait— the scene on the cover didn't actually happen that way.
Demon-Roach: Welcome to show business, kid.
— The Stinger, The Order of the Stick: Start of Darkness
Advertisement:

Don't judge a book by its cover — no, literally. Nor a video, a comic, or even a record. The cover is an essential part of the marketing plan. As is common in marketing, it can be an entirely inaccurate representation. It's not just the artwork that's misleading, either. The Blurb on the back may be even more disconnected from the story.

Popular characters who appear in little more than a cameo on the inside can be larger than the main character on the cover. A quiet, contemplative issue can be made to seem like an action-packed frag-fest, and vice-versa. The cover can push for an entirely different demographic than the rest of the work. This is often done intentionally so customers will purchase the product assuming that it relates to their interests in a visual version of Follow the Leader, as commonly found in The Mockbuster.

Film Posters and video packaging are particularly likely to mislead if it's an independent film, or a film in a genre that the marketing people assume most people are unlikely to appreciate. For example, an intelligently-written mystery for the whole family may have a cover that implies it's a comedy, or a family film that happens to have a dog in it may emphasize the dog on the cover. See also Never Trust a Trailer.

In non-graphic literature, it is not uncommon for a female character to be portrayed in a Stripperiffic outfit when they would wear nothing of the sort in the story. Also, virtually any Speculative Fiction book will have either a rocket or an alien of some sort on the cover, and dragons are commonly used on Fantasy, High Fantasy and Sword and Sorcery books, even if there is no dragon in the story at all. (Frank Frazetta and Boris Vallejo are particularly noteworthy as artists whose paintings make great book covers, but only occasionally actually relate to the contents of the books.)

This trope also applies to album covers, especially singles, which often get their own album art, for one or two songs.

The chances of this happening are magnified many times over when the game has to jump the national boundary. Especially in the pre-internet era, it wasn't at all uncommon to see the localization team (who may not actually be all that familiar with the work in question) creating a new cover from wholecloth, and said cover had about a 50-50 shot of looking nothing whatsoever like the actual product.

A related subtrope is the practice of creating the cover first, and writing the story based on that. This was common practice for comic books, especially at DC, during The Silver Age of Comic Books under editor Julius Schwartz, and was responsible for some of the weirdest stories of the time. However, it would sometimes result in a story that went off in a totally different direction and disposed of the cover situation in a panel or two. The website Superdickery features many strange, silly and inane covers of this kind.

Finally, in some cases, it may result from using stuff that was never meant to be a cover. A classic example is concept art, which can end up way off-base from the final product, but still look nice enough and roughly similar enough to be pressed into service as such.

This has occasionally gotten lampshade hung on it, as evidenced here

Many of these overlap with Sexy Packaging, and often feature Lady Not-Appearing-in-This-Game or Advertised Extras. Compare with Never Trust a Trailer, Wolverine Publicity, Bait-and-Switch Credits, Superdickery, and Never Trust a Title.

For cover illustrations that whiten dark-skinned characters, see Race Lift. For in-book illustrations, see Unreliable Illustrator. For magazines that sometimes put a bit of skin on their cover even though the interior is about gaming, sports, or whatever, see Fanservice Cover.

Inverted Trope of Spoiler Cover, where the cover is so accurate that it gives away important points.

Note: Covers lie a LOT. It happens all the time, even if only to prevent spoilers. So only put really interesting examples here now, not every cover that tells a little fib.