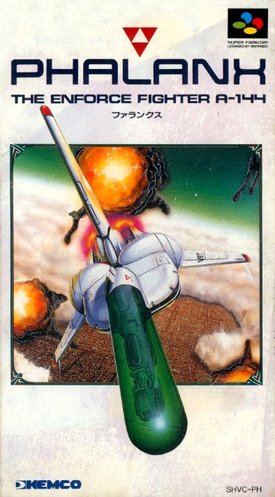 Behold! The ship from the robot's crotch!
Phalanx is a 1991 Shoot 'em Up developed by Zoom, and was originally released for the Japan-only Sharp X68000. It was later ported to the Super Nintendo Entertainment System; the English release of the SNES version is best known for its intentionally bizarre and idiosyncratic cover art featuring an old man playing a banjo (see Covers Always Lie).
Advertisement:

A sequel was in development for the Playstation but Zoom decided to cancel it, ruling that releasing an horizontal 2D shmup on the system would've been commercial suicide. Zoom did not completely scrap their work on it however, making the levels that had been completed an hidden minigame under the title Tiny Phalanx in Zero Divide. In a nod to this, the Phalanx ship is featured in a controller check minigame for Zero Divide: The Final Conflict on the Sega Saturn. It received a Game Boy Advance port with a different, more traditional cover. A WiiWare port released in Japan in 2009, though it never got released internationally.