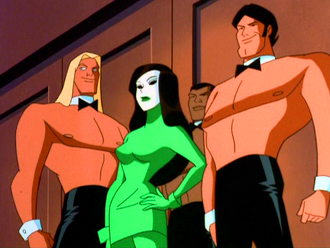 "At male strip shows, it is still the women that we watch, the audience of women and their eager faces. They are more obscene than if they were dancing naked themselves."
— Jean Baudrillard
Advertisement:

Chippendales note founded by Somen "Steve" Banerjee, who died October 23, 1994 is a club known for pretty much one thing: attractive men who strip, dance and perform stage shows for female-only audiences, not necessarily in that order. The club is more or less synonymous with 'male strippers', although its intention is to be more than just strippers, instead 'fulfilling women's fantasies' on the whole. In fact, the biggest thing that makes someplace a Chippendales-style club is if it specifically caters to women and not queer men.note Male strippers that perform for men are known as "go-go boys" and have their own cultural norms. The clubs they perform at are basically just gay bars with live entertainment. If anything, such venues are tamer than Chippendales-style clubs.

Probably the most iconic thing to come from Chippendales would be the variety of fanservice-y outfits. Indeed, the most common reference to Chippendales is the dancers' costumes, the most classic version being a pair of trousers, a collar with a bowtie (sometimes cuffs, too), and nothing between them.

Some might consider this to be the Spear Counterpart to the Playboy Bunny. note And it really is; one of the co-founders was Paul Snider, infamous murderer of Playboy Playmate Dorothy Stratten. It was he who suggested male dancers, and he may well have been inspired by the collar-and-cuffs outfits the Bunnies wore. Occasionally, this will be done literally by adding bunny ears to the costume, especially if they're accompanying a bunny-suited female.