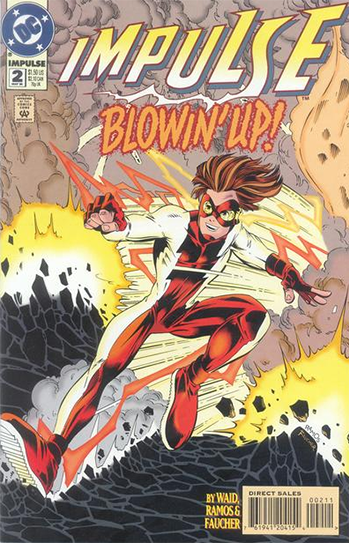 My name is Bart. I hope my spelling's okay. I just learned to write this morning ...
— Bart Allen, Impulse #1
Advertisement:

Impulse is the title of a DC book by Mark Waid, Ethan Van Sciver, Humberto Ramos and Wayne Faucher featuring the speedster Bart Allen that ran from 1995 until its cancellation in 2002.

Barry Allen's grandson from the future is in the present to stay and he's sent to live with Max Mercury, formerly known as the speedster hero Quicksilver, in Alabama for guidance and guardianship. He enrolls in school where it quickly becomes apparent that being raised by virtual reality has not prepared him for interacting with real people, nor studying in such an environment. Bart manages to find some fast and loyal friends regardless of the inadvertent destruction he tends to leave in his wake and learns to get by in the modern age even if he never tries to fit in. He also ends up time traveling to other periods rather often during his adventures as Impulse.