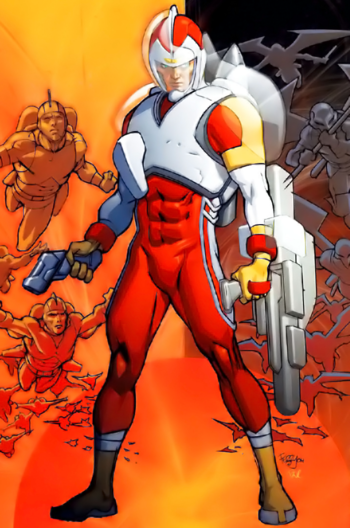 Adam Strange is a DC Comics space hero character from the 1950s, who still appears occasionally in their comics and cartoons. He was created by Gardner Fox, and first appeared in Showcase #17 (November, 1958). After three try-out issues in Showcase, he became a regular feature in Mystery in Space beginning with #53 (August, 1959).

Adam was an ordinary Earthman, an archeologist who was teleported to the planet Rann (located in the Alpha Centauri solar system, the closest to Earth) accidentally after being hit by the zeta beam, a communications beam invented by a Rannian scientist named Sardath that was somehow altered en route to become a teleportation effect. Adam fell in love with Sardath's daughter, Alanna, but it turned out that the zeta-beam's effects only lasted a few hours, and then he was returned to Earth. Adam then calculated where the next zeta beam would strike Earth, and made sure to be at that spot so he could return to Alanna, even if only for short intervals at a time. In addition, he helped protect Rann from various menaces, monsters and aliens, using a Rannian jet pack and a raygun, plus, most notably, his wits and scientific knowledge.

In other words, this series was essentially a Silver Age, Comics Code-friendly version of John Carter of Mars.

Adam is a long-time ally of the Justice League of America, though not a member. (At least until recently.)

Eventually, a way to make the z-effect permanent was found, and Adam stayed on Rann, and married Alanna.

A two-issue story in the Alan Moore run of Swamp Thing stated that Adam was not transported by accident, but rather that the Rannians needed him to help repopulate their species as nuclear war had rendered them sterile. The idea was further developed in a three-issue miniseries by Richard Bruning in which Adam learned the truth, Sardath went mad, and Alanna was killed off. This Retcon was quietly undone in the late 1990s by Mark Waid, who revealed Alanna was still alive and casually had Adam mention curing Sardath's madness. The "sterile Rann" Retcon has gone unmentioned since, and associated miniseries seems to have tacitly slipped into Canon Discontinuity.

In the New 52, Adam and Alanna are members of Justice League United, and their origin is tied to the team's. However. Alanna was given a Race Lift as a black female from Earth, at least Half-Human Hybrid child of Sardath born on Earth by Issue 16.

Adam returned to prominence in a 12-issue miniseries as part of the DC Black Label, Strange Adventures (2020). Written by Tom King, with art from Mitch Gerads and Evan "Doc" Shaner, the novel focuses on a recently-retired Adam Strange, the things he did on Rann, and whether or not those were war crimes. Adam and Alanna try to hold their lives together, on Earth and on Rann, as the Pykkts prepare a new invasion force and Earth's superhero community tries to figure out the truth.

No relation to Professor Hugo Strange from Batman's rogues gallery, or the Marvel character Adam Warlock or Doctor Strange.