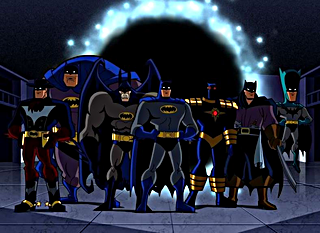 The Bat-family that fights crime together, stays together.

Meeting all of them at once! This gives lots of opportunities for Other Me Annoys Me bickering, while at the same time most versions of the character can find some version they can get along with. If Evil Me Scares Me, they could be there too, but at least they'll probably be outnumbered. The most important thing, though, is that they'll all be able to fight a common foe that previously overpowered them, or accomplish a significant goal.

Time-travel examples, such as a character meeting his past or future self/selves, don't count unless the mechanics of the work mean time-traveling creates a different universe. For a meeting of selves from the same universe, see Me's a Crowd. When other selves simply meet or exist without necessarily teaming up against someone or something, see Alternate Self.

Sister Trope of Intra-Franchise Crossover, which is when different incarnations of the story itself crossover. Contrast Never the Selves Shall Meet.

Strong Bad gathers several alternate universe versions of himself to form a supergroup and record a song, "Save the Last Email for Strong Bad".

Strong Bad gathers several alternate universe versions of himself to form a supergroup and record a song, "Save the Last Email for Strong Bad".