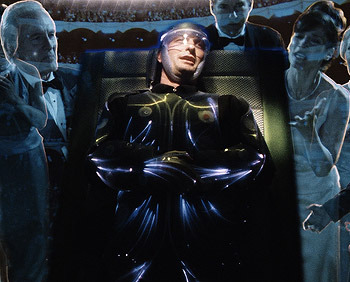 If you're thinking about leaving, keep dreaming.
Cobb: They come here every day to sleep?
Elderly man: No. They come to be woken up. The dream has become their reality. Who are you to say otherwise, sir?
— Inception
Advertisement:

A character is knocked out, or goes to sleep, and wakes up in their own personal paradise. Whatever they wanted most all their life is finally theirs.

The truth, however, is that they're being held prisoner by another character who is using something — a machine, a Platonic Cave, or other phlebotinum — to cause very intense and very realistic hallucinations. Some monsters even weaponize the ability to project Your Heart's Desire to snatch up easy prey.

Sometimes the lotus-eater has no idea it's all fake. Sometimes they do know but don't care. In order to escape, the dreamer has to figure out they're dreaming, if that isn't already known to them; then they have to break the masquerade and give up their life's dream. If they're in too deep, friends (or even characters from the fantasy itself) hoping to mount an Orphean Rescue have to force the hero to Battle in the Center of the Mind in order to escape. More often than not, a Dream Apocalypse occurs. Might involve Artificial Outdoors Display.

Bonus points go to the villains if they attempt to drive the protagonist to despair by turning the dream into a nightmare or otherwise play on the protagonist's emotions.

Because of the nature of this trope, it often lends itself to doubts after the characters "escape". Sometimes it isn't clear whether their escape is genuine or not. This can range from Epileptic Trees theories by a handful of viewers, all the way up to extreme canon cases of a Dream Within a Dream. In this tone, a particularly Fridge Horrific ending for a villain (or a hero) may see them fall under the spell of the Machine, but only for a second before Shattering the Illusion, defeating their enemies, and re-making the world in their image. Cut back to reality, where they're still under the thrall of the Machine.

Often lends itself to anti-escapism aesops against spending all of your time in a virtual fantasy world.

In the majority of these cases, Your Mind Makes It Real. May also be an exitless Happy Place or not-so-happy Ontological Mystery or Psychological Torment Zone. If the place isn't happy, but the hero is still made to believe it's real over his old life, it's a Cuckoo Nest. May be equipped with a Dream Emergency Exit. May be used in conjunction with the "Leave Your Quest" Test to create The Final Temptation. May be used to set up an Epiphanic Prison. If an entire society lives in one, it's a Terminally Dependent Society. May involve Mind Rape at some point. Possible to involve Victory Is Boring. May overlap with cases of Artificial Afterlife, where the afterlife in question may take place in some digital paradise.

The trope name comes from The Odyssey, where Odysseus meets a society living off narcotic plants, to the extent that anyone who eats of the lotus no longer cares about anything else, including going home. This makes the trope Older Than Feudalism. Contrast with Psychological Torment Zone.

Beware of spoilers. The revelation that the events in the story are just an induced fantasy is often used as a major plot twist.

The Wizard of Oz:

"What do you mean that I've been on TV Tropes for four years straight... holy shit!"

Nerissa screws herself over

When Nerissa tries to betray Elyon, Yan Lin and the rest of her fellow prisoners in the Seal of Nerissa after Cedric's defeat, she thinks that she escapes the Seal to the outside world without them but in reality they are released while she is still in the Seal, stuck in a vision where she successfully conquers the universe, Caleb and Julian by her side, with adoring crowds and everything. It's unlikely she'll ever realize the truth.

Nerissa screws herself over

When Nerissa tries to betray Elyon, Yan Lin and the rest of her fellow prisoners in the Seal of Nerissa after Cedric's defeat, she thinks that she escapes the Seal to the outside world without them but in reality they are released while she is still in the Seal, stuck in a vision where she successfully conquers the universe, Caleb and Julian by her side, with adoring crowds and everything. It's unlikely she'll ever realize the truth.