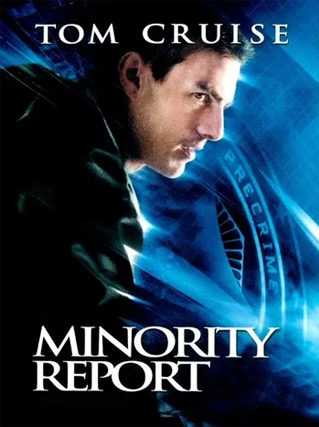 Dr. Iris Hineman: Most of the time, all three precognitives will see things the same way, but once in a while, one of them will see things differently than the others.
John Anderton: Jesus Christ, why didn't I know about this?
Dr. Hineman: Because these "minority reports" are destroyed the instant they occur.
Advertisement:

Set in Washington, D.C. and Virginia in the year 2054, the film centers around a new and experimental branch of the police, the "Precrime Division", which tracks murders about to happen with the aid of three precognitive psychics who can see the future in limited flashes. Things start to get tricky when one of the chief Precrime officers, John Anderton (Cruise) gets flagged by the precogs as a future murderer. Now, he is forced to evade his own fellow officers as he tries to figure out why he would want to murder a man he's never even heard of yet...

Often hailed as one of both Spielberg's and Cruise's most successful films, not only raking in more than three times its hundred-million-dollar budget worldwide, but also scoring near-universal acclaim from critics. Roger Ebert even gave it the honor of "the best film of 2002".

A tie-in videogame based on the movie was released in the same year, Minority Report: Everybody Runs.

In fall of 2015 it was made into a television show on Fox. The series follows Dashiell ten years after the end of the film as he continues to use his gift to help people on his own, though he has little success until he partners with a detective that can put his visions to use. See tropes for the series here.

Agatha has only one piece of advice for Jon.

Agatha has only one piece of advice for Jon.