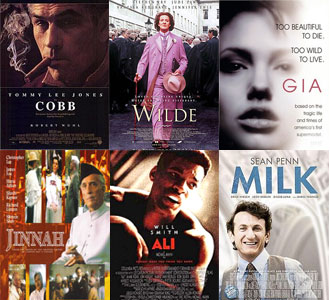 To name a work is a delicate art: it has to capture the essence of the work (at least most of the time) and do justice to the content. With biopics and other biographical works, this is slightly trickier since a real person's life rarely follows a particular, simplistic theme that eases the process of naming.

Sometimes you can use certain phrases that you think represent the person well: "Raging Bull" for Jake LaMotta or "The Pursuit of Happyness" for Christopher Gardner. But some other times it's best to just name it after the person. Usually it's their last name. Sometimes the given name. It just has this immediate impact. Probably because being mononymous traditionally carries a certain honour (Plato, Rafael, and so forth), this has a certain effect of grandeur.

Sub-Trope of One-Word Title (although some variations include the), and may even overlap with One-Letter Title (W.). Also a Sub-Trope of Character Title. Not to be confused with a variation where the trope is applied to fictional characters, common in TV series in order to highlight the title character's central role.