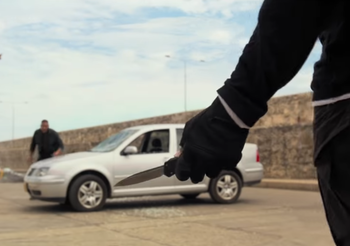 "Let's cut to the chase; I'm gonna hand you a life of pain."
The Menacing Hand Shot is a particular framing shot meant to dramatically show that one character means to threaten or attack another. The shot is usually from behind the character and at their waist or hip level and is focused on one of their hands, held down or slightly out from the body, and holding or drawing a weapon of some sort, becoming a weapon, or in preparation to do so.
Advertisement:

The character is often walking toward whoever they intend to attack, although the shot can be done just as effectively from a static pose. The intent is to establish or build dramatic tension for the upcoming confrontation and make it clear that the character has no qualms about whatever they're intending to do.

This shot is sometimes paired with characters dropping their weapon out of their sleeve. Bladed weapons are often featured, especially switchblades and other such knives, due to the extra visual punch of the blade coming out.

When Two gets punished for mistreating Eleven, the camera focuses on the Shock Collar in the orderly's hand.

When Two gets punished for mistreating Eleven, the camera focuses on the Shock Collar in the orderly's hand.