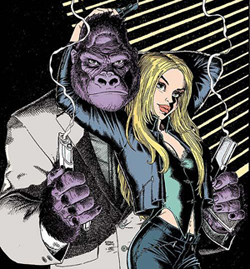 Being a private Dick in this town was hungry work... and he was all out of bananas. note It should be noted that she's the private investigator, he's a comic artist.
"The Butler Did It! With a death curse! From space! Take him away, Troll Patrol!"
Advertisement:

A sister trope of "neo-noir" or cyberpunk, fantastic noir is a relatively small subgenre that blends the setting, characters (it usually stars a Hardboiled Detective who sometimes doubles as an Occult Detective), and plot structure of a Film Noir mystery story with the more colorful elements of fantasy and Science Fiction. The genre seemed to arrive all at once in The '80s and remains strong today, with the publication of such books as Anonymous Rex, Who Censored Roger Rabbit?, Sweet Silver Blues, Stalking the Unicorn, and The Hollow Chocolate Bunnies of the Apocalypse.