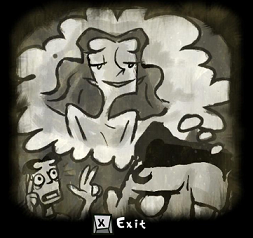 ...And that's how Sasha learned where babies come from.
Kerrigan: Captain Raynor, I've finished scouting out the area and... You pig!
Raynor: What? I haven't even said anything to you yet!
Kerrigan: Yeah, but you were thinking it.
Raynor: Oh, yeah, you're a telepath. Look, let's just get on with this, okay?
— StarCraft I
Advertisement:

Congratulations, You have just acquired the amazing superpower of Telepathy! Now you can peek into the innermost thoughts of your friends and enemies whenever you want. Isn't that awesome?

There's a bit of a problem here, though. You see, people tend to think about sex. A lot, in fact. And sometimes their thoughts involve sex with you, whether you like it or not. So, guess what you're going to find when you start mind-probing people out of curiosity?

This isn't always the fault of the mind-reader, however. Sometimes the telepath can't control their powers. Other times, it's part of an implied lesson in using one's power responsibly and the presence of this trope is simply karmic justice.

For bonus points, have him accidentally read the mind of someone in the next room actually having sex, which can lead to Sex by Proxy. A subtrope of A Mind Is a Terrible Thing to Read, though often played for comedy as well. See also Forgot About the Mind Reader, My Sensors Indicate You Want to Tap That, Imagine Spotting.