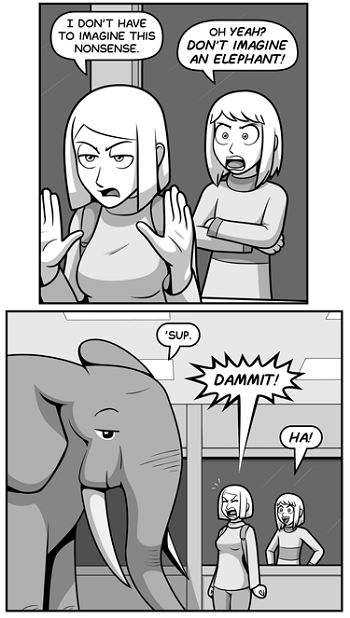 Arthur: Okay, here's me planting an idea into your head. I say "don't think about elephants." What are you thinking about?
Saito: Elephants.
Arthur: Right, but it's not your idea, because you know I gave it to you.
— Inception

(And now, not only are you thinking about it, but you have a headache.)

The suggestion that you should not be thinking about something is, in itself, sufficient to induce thinking about that thing. No other provocation is required—you don't have to be surrounded by elephants for the old schtick to work. For instances when people can't stop thinking about some aspect of a person because it is so very noticeable, even if they don't want to mention it due to politeness, see Ignore the Disability. When thinking about a particular action makes it more difficult than performing the action unthinkingly, you are faced with the Centipede's Dilemma. Telling someone not to do something in hopes that they will decide to go and do it is plain ol' Reverse Psychology, or one of its Sub Tropes.

If you live in a universe with Thought Crime, or one where Your Mind Makes It Real, this sort of thing can be particularly dangerous.

This phenomenon is actually a direct result of how the human brain is wired. Neurons that are used to interpret words like "elephant" have synaptic connections to the neurons used to picture and think about the concepts those words represent; if they weren't, verbal language itself probably couldn't function. See Language Equals Thought.