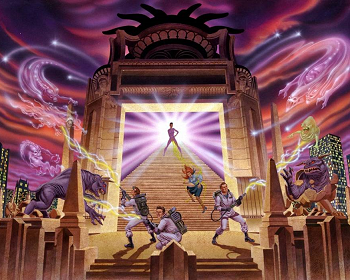 Ghostbusters Spooktacular was a show that ran at Universal Studios Florida in the early to mid '90s. Based off of the popular film series, the show featured a somewhat-recreation of the first film's pivotal climax of the Ghostbusters facing off against Gozer. First going live on June 7, 1990, the show was one of the park's opening day attractions.

There were two different versions of the show in its run. The first one depicted a straight-forward behind-the-scenes look of the movie, where a female tour guide would show guests replicas of the film's sets as well as explaining how some of the special effects were done. The show would then take a dramatic turn as the set would come to life, with Gozer awakening to capture the tour guide before the Ghostbusters show up for real to save her.

The second and often more-remembered version of the show replaced the first iteration in 1993. It gave a sizable expansion to the attraction, adding in a pre-show as well as more of an actual storyline. The second version started with Louis Tully introducing the guests to the Ghostbusters' new branch location in Orlando, Florida. With the backstory being the Ghostbusters wanting to expand their business across the country, Louis would demonstrate to the guests the work and equipment needed to become a Ghostbuster and open up a new branch for the business.

In the main show, the demonstration would get interrupted by Walter Peck, who possessed a warrant to shut down the entire business due to the belief that the Ghostbusters are frauds and ghosts don't exist. In his attempt to manually shut down the facility, Walter inadvertently ended up releasing the captured ghosts to wreak havoc; with Gozer being the big ringleader of them all. The Ghostbusters would then make their appearance, stopping the loose ghosts and defeating Gozer in his Stay Puft Marshmallow Man form once again.

The show closed on November 8, 1996 and was later replaced with Twister...Ride it Out (which has also since been closed). References to Ghostbusters can still be found in the park today, though in an extremely-limited fashion.

Tropes shown in Ghostbusters Spooktacular include: