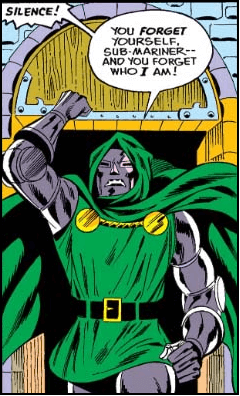 "Beth, I love you more than anything in the world but right now I kinda need you to maybe shaddup your face!"
— Santino Marella, Monday Night Raw
Advertisement:

A powerful character needs to talk. He's important, so nothing else but "Silence!" will do to quell the unruly masses or to stop the plucky hero mid-sentence. It shows that he or she is in charge, and what those other people are saying is unimportant or foolish.

Do this with a crowd of mooks and impress your friends with how quiet they become. Use this to intimidate poor peasants begging for clemency.

You can say things like "Quiet!" or "Be still!", for a similar effect. However, the more vulgar "Shut up!" doesn't work as well, except when addressed to genteel types who would be stunned to hear such an improper outburst. Go ahead and hold up a hand, it helps with the image.

There are dozens of ways to parody this. A common one is for the villain to yell "Silence!" at a minion who's trying to reveal something important, and later demand to know why he wasn't given the important information. Another is to shout "SILENCE!" when nobody is speaking to begin with. A third is for the character to yell "SILENCE!"... and be completely ignored.

Here is the first

compilations with a lot of examples.

See also Shut Up, Hannibal! and Talk to the Fist. Big "SHUT UP!" can sometimes overlap. Not to be confused with You Fool!.

open/close all folders
Anime & Manga
Weevil: Ah...yeah, I knew that. Melvin: So when I say "SILENCE," you cease making noise or I will cease it for you.
Comic Books
Comedy
Advertisement:
Films — Animation
Films — Live-Action
Literature
Live-Action TV

Alternative Title(s): If I Want Your Opinion