Don't Touch It, You Idiot! 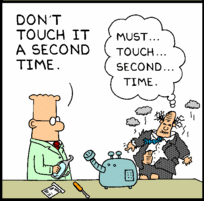 "If you put a large switch in some cave somewhere, with a sign on it saying 'End-of-the-World Switch. PLEASE DO NOT TOUCH', the paint wouldn't even have time to dry."
— Thief of Time
Advertisement:

Another one of the savvy's Stock Phrases. Just like how there are some things nobody is absolutely ever supposed to say, there are some objects the viewer/reader can instantly, instinctively tell nobody is ever supposed to touch: the singular artifact placed on a pedestal in the abandoned Temple of Doom, the Mineral MacGuffin locked in a treasure chest buried in a cave on an uncharted island, the glowing MacGuffin in a display case in the Diabolical Mastermind's study, or the Forbidden Fruit surrounded by signs that boldly warn DO NOT TOUCH! WILL CAUSE THE END OF THE WORLD AS WE KNOW IT!

Who would be dumb enough to touch any of that? Fortunately for the plot, plenty of Genre Blind characters are, all the while ignoring their companion's warning of "Don't touch it, you idiot!" They never listen to them. Cue the rolling boulder/erupting volcano/invasion of Mooks/release of the Sealed Evil in a Can/ticking stink bomb and all their complications/a snarky "I Told You So."

In his analysis of the Fairy Tale, The Morphology of the Folktale, Vladimir Propp concluded that the functions "prohibition" and "disobedience" really formed a single plot function; any prohibition was bound to be violated.

This trope is for variations of a warning Stock Phrase. Otherwise, see Forbidden Fruit and Schmuck Bait (of which the Big Red Button labeled "DO NOT TOUCH" is a subtrope). Plus, if someone ever asks, "What Does This Button Do?", this is the only acceptable way to answer.

Not to be confused with Please, Don't Touch Anything

WARNING: UNDER RISK OF SEVERE INJURY OR DEATH, DO NOT READ THE FOLLOWING TROPE EXAMPLES

Albert and the Clock Model

Albert and the Clock Model