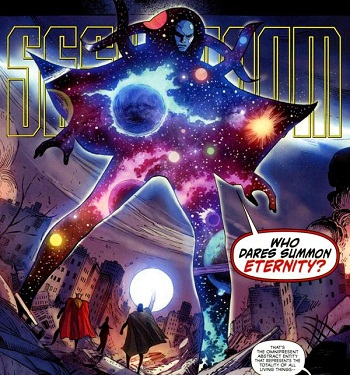 Who dares put an image on this page?
"You dare bring light to my lair?! You must die!"
— Ganon, Zelda: The Wand of Gamelon
Advertisement:

Who DARES to make this page a Self-Demonstrating Article?

Standard villain or otherwise ominous being Stock Phrases. Said in a booming deep voice, the villain rhetorically asks Who Dares whatever action the hero has done; be it defy them, attack them, talk to them, look at them, etc. Expect them to start referring to themselves in the third person, and giving themselves important sounding adjectives.

Possibly has something to do with the odd word-order (you don't say "How do you dare?") making the phrase sound like Antiquated Linguistics, always the domain of the overimportant egotist.

Proper heroic form, incidentally, is to stand tall and reply "I dare!"

"How dare you!" is a common variant used by heroes and villains alike, the former usually in response to the villain Kicking The Dog.

with a lot of examples of "How Dare You!"

Any villain using this will usually give a "This Cannot Be!" variant upon defeat.

Who Dares to make Examples out of these?

Who dares to cut this article short with a stinger?

Tomin questions the Prior

Tomin questions the Prior