Did You Just Flip Off Cthulhu? 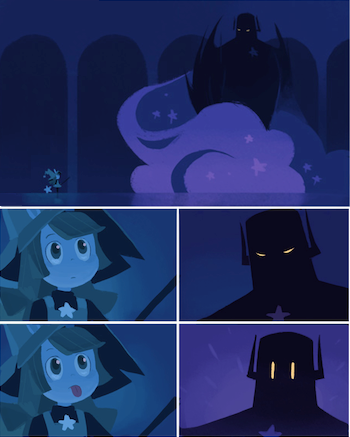 Cthulhu, you're in a whole mess of trouble. That is the true face of evil. You're dead, man.
"Only an immortal can kill another immortal. Here's your prize! Take this curse away from me, you big pussy!"
— Mysterion (to Cthulhu), South Park
Advertisement:

Insulting a being who is much more powerful than you.

May be used comedically to deflate an otherwise-impressive villain. Hard to be menacing when the Team Pet beans you in the head with a rock.

This rarely ever causes the target any real harm. At most this can distract or annoy the Big Bad momentarily, giving the other characters time to escape, prepare, or attack. Can provide The Load with an opportunity to redeem themself.

See also Blasphemous Boast, Rage Against the Heavens, Smite Me, O Mighty Smiter!, Heroic Sacrifice, Defiant Stone Throw, and Defiant to the End. If the person providing the distraction tries to make it last as long as possible to help his teammates, it's Holding the Floor. Sometimes literally involves Flipping the Bird.

Contrast Wowing Cthulhu, where the character doesn't piss the godly being off but rather amazes them — that said, Flipping off Cthulhu may also Wow Cthulhu when said godly being actually likes their attitude.

open/close all folders
Anime & Manga
Comic Books
Films — Animation
Films — Live-Action
Live-Action TV
Podcasts
Radio
Roleplay
Tabletop Games
Web Animation
Webcomics
Web Original
Web Videos
Western Animation
Real Life
"If he (the Devil) wrestle against you to a fall through avarice, showing you all the Kingdoms at one instant and in the twinkling of an eye, as belonging to himself, and demand your worship, despise him as a beggar. Say to him relying on the Seal, I am myself the Image of God; I have not yet been cast down from the heavenly Glory, as you were through your pride; I have put on Christ; I have been transformed into Christ by Baptism; worship thou me. Well do I know that he will depart, defeated and put to shame by this; as he did from Christ the first Light, so he will from those who are illumined by Christ."
— Oration 40, X