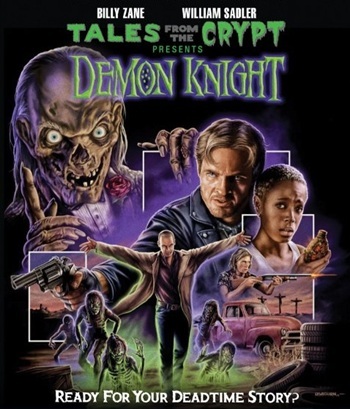 The Movie of the HBO television series Tales from the Crypt, released in 1995. Demon Knight tells the story of a drifter named Frank Brayker (William Sadler) who arrives in Wormwood, Texas, and seeks refuge in a church-turned-hotel where he meets the no-nonsense landlady Irene (C.C.H. Pounder) and her niece Jeryline (Jada Pinkett-Smith), alcoholic Uncle Willy (Dick Miller), prostitute Cordelia (Brenda Bakke) and her abusive boyfriend/pimp Roach (Thomas Haden Church), and fired mailman Wally (Charles Fleischer) who's hopelessly in love with Cordelia.

Not long after Brayker's arrival, a handsome and charming gentleman in a trenchcoat and cowboy hat known only as The Collector (Billy Zane) shows up with Sheriff Tupper (John Schuck) and Deputy Bob (Gary Farmer), seeking a key-shaped artifact that he claims Brayker stole from him. The Collector soon reveals that he's actually a demonic Bounty Hunter and quickly lays siege to the hotel, raising up an army of skeletal minions to aid him in getting his dirty hands on the Key and going about tempting some of the hotel's residents with their innermost desires. Brayker reveals to the residents (well, those who survive the demonic onslaught...) that the Key once contained the blood of Jesus Christ and subsequently that of previous guardians of the Key. The Key can ward off evil if it contains blood, but will bring about The End of the World as We Know It if it runs out of blood and is used by the forces of darkness.

Not to be confused with Demon Knights. Followed by Bordello of Blood.