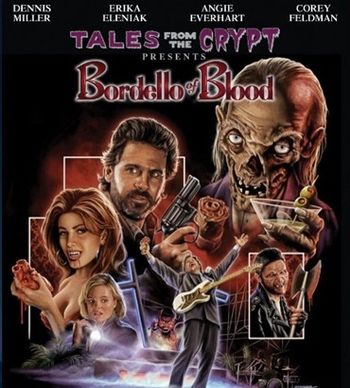 Bordello of Blood is the second film based on Tales from the Crypt, following Demon Knight. Starring Dennis Miller, Angie Everhart, Erika Eleniak, Chris Sarandon, and Corey Feldman, the movie tells the story of Rafe Guttman (Miller), a very snarky private eye who's called in by Catherine Verdoux (Eleniak) to find her rebellious brother Caleb (Feldman), who went missing after storming out of their house following an argument.

Rafe's investigation leads him to a whorehouse/mortuary run by McCutcheon (Aubrey Morris). Further investigation leads our wisecracking hero to discover that the brothel/mortuary is inhabited by vampires led by Lilith (Everhart). Turns out Lilith was resurrected by Catherine's boss, televangelist Reverend Jimmy "J.C." Current (Sarandon), so he could rid the world of sin, but Lilith's got her own agenda. Now it falls to Rafe and Catherine to save the world before Lilith and her sexy vamps overrun it.