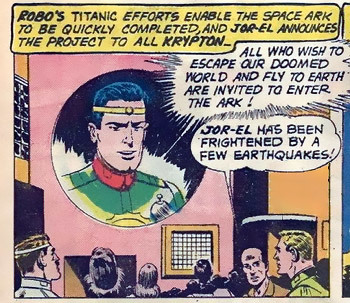 And yet it blows.

"Prophet is concerned that this will make the aliens come back... But everyone blows him off, and sure enough, the aliens come back. Wow, who could have seen that coming? If only there were someone around here whose name means "someone who predicts things"!
— Zero Punctuation on Crysis 3
Advertisement:

The less mythic, more secular subtrope of Cassandra Truth, the Ignored Expert is a scientist or expert who predicts a major disaster to happen, but is not believed by his contemporaries.

No matter how qualified he is and how urgent and relevant his expertise is to the problem at hand, his warnings will be treated like madness or lies. The Ignored Expert will be ignored by his peers, or reviled and ridiculed regardless of evidence, credibility or persuasiveness. If he's lucky, he'll manage to persuade a philanthropist to help, or make The Hero aware of the problem. In extreme cases, he will be fighting nearly alone to stop (or at least expose and delay) a nigh unstoppable disaster. His situation isn't helped if he has a reputation as (or is) an Agent Mulder.

In natural disaster movies or Science Is Bad stories, expect the Ignored Expert to be the lone voice of sanity warning against a particular course of action that will, of course, be taken. That action could be entrusting the newborn AI with control over nuclear missiles, releasing The Virus in a field test, administering Super Serum to criminals, or the use of machines Powered by a Forsaken Child. His natural enemy will be the Suit with Vested Interests.

If the Ignored Expert himself created the phenomenon he is warning against, he's the Reluctant Mad Scientist.

This trope was previously named after Superman's father, Jor-El, a Kryptonian scientist whose dire warnings that their home planet would die were ignored. Famously, he managed to save his son, Kal-El, by putting him on an escape pod and sending him to one of the most successful media franchises in history.

The Ignored Expert is very similar to The Cassandra, but he also he has an impressive track record to back himself up. Of course, this doesn't help him one bit, and he can still be subject to Cassandra Did It. This can be especially egregious if they were specifically brought in as an Expert Consultant. If the "expert" is someone totally unrelated to a situation who manages to notice something all the experts working on it have missed, he is an Einstein Sue. An "expert" whose credentials or expertise aren't too clear is The Worm Guy.

Note that while this trope can be Truth in Television in certain cases, reality is always far more complex. Scientific discoveries need to be repeatedly proven experimentally, so there is a reluctance to immediately accepting new information as fact. The release of findings may also be subject to political pressure, and may thus be suppressed or heavily controlled for political or ideological reasons. Or just plain old Anti-Intellectualism.

Finally, it should be noted that, especially in the "soft" or social sciences, the experts may themselves heavily disagree on the right course of action. In these cases, one expert's conclusions and ideas may seem like complete lunacy to another expert.

Subtrope of Cassandra Truth. Compare They Called Me Mad!, Only Sane Man, The Dissenter Is Always Right. Contrast Stupid Scientist.

Helen tells Lionel to make Bitsy's drinks at the scheduled time despite being understaffed and don't talk to Bitsy about it until she gets back from her day off because she knows how to handle her. Lionel ignores Helen's warning and tries to talk to Bitsy about hiring more staff.

Helen tells Lionel to make Bitsy's drinks at the scheduled time despite being understaffed and don't talk to Bitsy about it until she gets back from her day off because she knows how to handle her. Lionel ignores Helen's warning and tries to talk to Bitsy about hiring more staff.